SCRIPT stands for Sustainability, Care & Compassion, Respect, Innovation, Prosperity, and Trust – six Malaysian values at the core of this living document which both lays out Anwar Ibrahim’s vision for a stronger, better Malaysia and provides a method of developing policies fit to the contemporary and increasingly complex world in which we live. 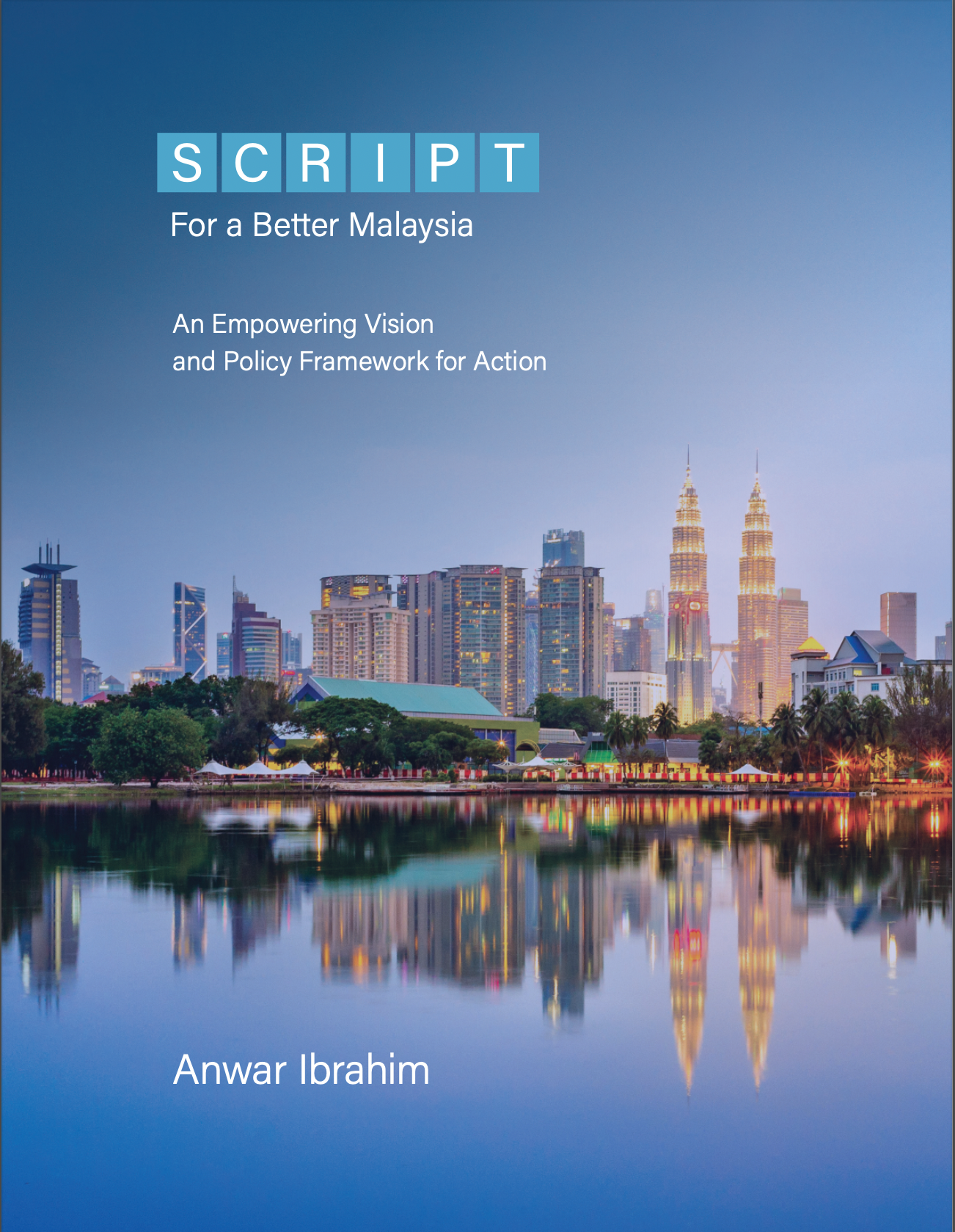 This book builds on Anwar Ibrahim’s more than four decades of experience in public service heading key ministries in the Malaysian government, leading various international development and peace organizations, and his time educating at leading universities around the world. Anwar Ibrahim has taken this experience and synthesised it with the thoughts of some of the greatest minds from around the world, and the input of the people of Malaysia he has listened to and learned from throughout his career.

SCRIPT delivers to Malaysians a robust framework upon which future-oriented policies can be crafted with indigenous, home-grown creativity and expertise.  It proposes a set of six, core values which must be deeply embedded in the problem-solving process in order to adequately address the increasingly complicated societal challenges facing Malaysia, in an increasingly complex world.

As a policy document it is unique in that it acknowledges the vast repository of wisdom that lies in the minds and hearts of the people of Malaysia and invites them to participate in creating that future. SCRIPT is written in a way to empower all Malaysians to develop solutions that can build a peaceful and prosperous future.

SCRIPT for a Better Malaysia

‘Throughout history,’ argued Ibn Khaldun in his magnus opus, The Muqaddimah, ‘many nations have suffered a physical defeat, but that has never marked the end of a nation. But when a nation has become the victim of a psychological defeat, then that marks the end of a nation’. He was able to offer this observation based upon his experience as a scholar-statesman, during a tumultuous period of North African political history.

The psychological defeat of a nation can come in a variety of forms. But foremost is an inferiority complex that can result from constantly looking at oneself through the eyes of others. In many respects, Muslim nations also fall within this trap of having to live up to the ideals of Islam while also having to appease western hegemony. But occasionally, you come across a political vision that does not conform to measuring oneself by the perceptions or judgments of others. Instead, it is bold enough to offer new insights that will help navigate its citizens through an increasingly chaotic and complex world, with new critical tools, and not recycled ideas or tired clichés.

Enter, SCRIPT, a wholistic vision and policy framework for a viable, dynamic, and inclusive Malaysian future. For many, the mere mentioning of a political manuscript is a put off, especially given how transformative visons are often presented within a utopian outlook. But the refreshing spirit of SCRIPT is that it is ‘neither a philosophical dream nor an unrealistic ideal,’ rather, it is a ‘recognition that business-as-usual cannot continue.’ With these words we see that Anwar is not simply offering a set of solutions, but something that recognises the reality we face in contemporary times.

SCRIPT is an acronym which represents the key drivers of the vision: Sustainability, Care and Compassion, Respect, Innovation, Prosperity, and Trust. Unlike conventional acronyms, each of the drivers should not be read separately but interconnectedly. For example, sustainability is seen as a ‘future orientated practice’ as such it is integrated into all areas of the economy, commerce, business, law, education, and institutional frameworks. Not only this, but within each of the drivers are all the others. To build trust in Malaysia, the other five drivers must be considered. This follows for the other five drivers as well. The first step of the framework is to take what might be referred to as ‘buzz words’ (that by themselves may be robbed of any original good sentiments) and redefine them both in the Malaysian context (done by actually attributing Malay words and sentiments to the new definitions of the values) and in a context that accounts for the changing nature of our contemporary world.

Crucially this framework positions SCRIPT policies well for taking on the issues arising in postnormal times. As the developers of postnormal times theory, the Centre for Postnormal Policy and Futures Studies, co-publishers of Anwar’s SCRIPT, have noted extensively the need for a new approach to policymaking that not only takes stock of how things are presently changing, but that looks to the future, anticipating the changing nature of change itself. The SCRIPT approach presented by Anwar demonstrates an effective response to key features of postnormal times. First, the framework is keenly aware of the 4S’s of postnormal times: Speed, Scale, Scope, and Simultaneity. The policy framework acknowledges how changes are occurring faster, that the scale of change is shrinking, the scope of change is blowing up, and changes are occurring all at once. But more than that, SCRIPT gains an edge on other approaches for giving due regard to the 3C’s: Complexity, Chaos, and Contradictions. Within SCRIPT is the infrastructure for dealing with Complexity, rampant Contradictions, and most importantly Chaos. Anwar notes in numerous instances the need for complex solutions being required to take on complex problems – simple, quick fixes, will not do - obliging the Law of Requisite Varieties. Meanwhile chaos requires us to rethink our old standard operating procedures as more and more contradictions surface the zombie-like nature of age-old, yet no less flawed, institutions.

Accounting for the features of postnormal times requires a systematic process which is laid out clearing in Anwar’s SCRIPT. The first step requires a consideration of conventional approaches. Once unpacked and critiqued, the approaches, concepts, and ideas are to be placed before the six SCRIPT drivers and then evaluated in light of what policy wonks might refer to as a SWOT or PESTLE analysis. But that is not the end, rather it is only the beginning for those working in postnormal policy. Each SCRIPT driver, and any subsequent policy actions, must be constantly assessed, evaluated, and reviewed, especially considering emerging issues and global trends. As such, it is a live document which is constantly scanning the horizons to respond to the challenges by simultaneously tracking progress while examining global trends. Anwar’s framework balances our need to keep our eyes fixed upon our desired futures while not losing sight of the traditions and values which ground us in a postnormal world.

The SCRIPT drivers stem from a rich cultural repository and is rooted within a rich religious-cultural Malay tradition. For example, the concept of sustainability is a frequently used buzzword. However, sustainability within this document is understood within the Malaysian context. The Malay word, ‘kemampanan, speaks to a making, a process of sustainability that must be ongoing and a work of collective effort.’ Within the Malaysian tradition sustainability is a ‘balance or equilibrium (keseimbangan), that holds to the wellbeing of humanity itself; and a continued balance and humane respect for nature as well as the human person.’ While, within a western context, sustainability tends to refer to the natural environment; in a Malaysian cultural framework it includes sustainability of rural and urban communities, as well as families and individuals.’ Environmental sustainability remains a critical target for sustainable policies, but a sustainable Malaysia is one where sustainability becomes a cultural practice at the root of all endeavours from business to education, even as a way in which we live with one another.

Zia Sardar reminds us how ‘the future does not happen by itself, automatically, it is created through our actions or inaction in the present.’ One of the central threads of this document is the emphasis on the power of human agency or the belief that people have the power to shape their own preferred future. It rejects the view that humans are cultural dupes, passively responding to external events. Instead, it makes a compelling case against ‘passive acceptance of things changing’ to an ‘active agency of changing things.’ Changing things, it argues starts with reclaiming the power to define and to reject ideas or economic models that are not fit for purpose. For example, it demonstrates how the neoliberal logic have led to ‘excessive market deregulation, unwarranted tax cuts, fiscal austerity, rampant disparity, and economic dislocation.’ Embracing neoliberal economic policies with its internal contradictions will fail to delivery prosperity to all its people, as has been witnessed in Liz Truss’s UK. The solutions to the crisis cannot be solved via Euro-centric, Sino-centric, or even Eurasian models.

The timing of this document is crucial. The world is going through historically unprecedented and accelerated change with planetary uncertainty, political instabilities, and chaotic world events. SCRIPT is not about pessimistic doom and gloom or the decline and collapse of the future. Rather, it embraces the civilizational challenges for a desirable and sustainable future. It does this by accepting internal challenges of corruption, environmental degradation, social cohesion, unemployment and economic growth. It also responds to external concerns arising from Industry 4.0, AI (Artificial Intelligence), genetic engineering, and the disruption arising from COVID. Recognition of diversity and multicultural cosmopolitanism are one of many strengths of this document.

Religion is intentionally absent from the SCRIPT drivers, yet the Islamic ethical values make an active presence as it permeates throughout the document. The policy framework is not urban centric as it recognises the richness of rural areas and, at the same time, sees the urgency to respond to poverty and marginalisation. It moves beyond the political left and right. Instead, it articulates and emphasises high-ethics, and good governance.

Most policy documents are interested in the present or in some cases a distorted vison of the future. SCRIPT, however, accepts the challenges of the present whilst providing a navigational tool for alternative futures. It does this by acknowledging the future trends and emerging issues through questioning the received wisdom by rethinking and reformulating ideas and policies. More crucially, it sees people as active agents of change through offering potential scenarios and how they may assist in navigating a preferred future. While SCRIPT can be the right tool for setting Malaysia back on the tracks of prosperity, it also opens up new insights for policymaking around the globe and should be read with this in mind.

Dr Shamim Miah, Senior Lecturer, University of Huddersfield. He is also senior fellow at Centre for Postnormal Policy and Futures Studies. Shamim is author of four books. His most recent book is on Ibn Khaldun: Education, History and Society.

Other Reviews of ANwar Ibrahim's SCRIPT