It has become commonplace to hear European politicians discuss how the visibility of Islam in public spaces and the diversity of Muslim identities living in Europe are a threat to “European values and culture”. Debates evolve around such topics as the headscarf or the face veil, construction of mosques, accommodating the needs of Muslim students in schools, and securitization of Islam. Especially due to the strengthened role of far-right politics these discussions are mostly embedded in xenophobic discourses. Within the anti-Muslim and anti-Islam propaganda, one recurrent discursive frame is a “fear for the future” of Europe, the Western cultural heritage or a specific nation, spiced up by the idea of an “Islamization” that “forcibly” follows from immigration of Muslims to European lands. This short text analyses examples from Finland and how in political campaigns future has been used as a discursive topos to convince voters that Islam and Muslims are to be seen as a threat against which political measures need to be taken and how we can use the analytical frame of “Three tomorrows” (Sardar & Sweeney 2016) for its analysis. 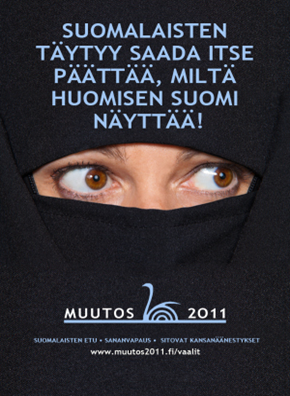 During the 2015 Finnish Parliamentary elections, the nationalist and EU-critical “Muutos 2011”-party (Change 2011) used an image of a woman covered with the Islamic face veil on their campaign posters. The slogan on the poster shouted out “Finnish people have to decide for themselves how Finland of tomorrow looks like!” Another overtly racist example was the use of the slogan “Finland belongs to the Finns, Somalia belongs to the Somalis. Vote in support for Somalis returning back home.” in a picture of a woman wearing a black face veil and a white middle-aged Finnish man in the opposite corner. The latter was a campaign advertisement for the “Muutos 2011”-party (“Change 2011”) spokesman Jari Leino. A few days after a photo of his advertisement went viral on social media, Leino stated in a newspaper interview that his motivation was merely to start a discussion on whether “Somalis were ever going back, since the situation in Somalia for now seems to be settled.”

However, Leino’s comments were not meant as humanitarian concern for the repatriation of Somali immigrants from Finland, his campaign slogan and the message behind the poster image serve as a precise example of how the topos future is used in Islamophobic discourse. Jari Leino’s slogan claims Finland as a nation state (in analogy to the “Muutos 2011”-party’s general ideology)[1] and implies that especially people with Somalian background should not be residing in the country that “belongs to Finns”. Moreover, the image of the veiled woman connotates the country’s ability to “possess” religious aspects indicating consequently that Muslims and Islam were a foreign element that needs to be relocated to Africa.

Sardar and Sweeney argued in their seminal article The Three Tomorrows of Postnormal Times (2016) that societal, economic, environmental, scientific or political phenomena and developments are embedded in multidimensional present and futures. The present is thus not actually only manifested in this very moment, but it is an “extended present”, the first tomorrow, with observable trends and predominant ideologies of today manifesting themselves also in the coming years. (ibid: 5) The level of ignorance attached to the extended present is called “Plain ignorance”. It is characterized by a lack of knowledge about the phenomena in question and is controlled by prejudices, which nevertheless, can be overcome if enough accurate knowledge is acquired and the problems in hand are approached through an open-mind. (ibid. 7-8) Thus, for the case of the two campaign posters, we see Islam depicted as a monolithic, radical religion (“all Muslim women wearing a face veil”) and Muslimness is as such opposed to Finnishness, excluding potential individual identities that would combine both.

The extended present is followed by “the familiar future(s) “which can and might extend from ten to twenty years but, (…) seems familiar because it is mediated by images and imaginings of the future(s) – from data-driven projections to science fiction.” (ibid. 7) The ignorance level manifested here is called “Vincible ignorance”, which cannot be overcome by acquiring knowledge because the ignorance refers to the future developments and we do not know what the right questions to be asked are. Thus, we have actually nothing to learn except for the fact that we do not know but should know. (ibid. 8) Hence, the “Vincible ignorance” in our example posters lies in the utterance “…how the Finland of tomorrow will look like”. The future of Finland seems familiar because it is marked by an increase of Muslim immigrants and consequently an increase of the Muslim population in Finland, which would possibly become the dominant demographic group and thus make Finland a “Muslim majority country”. Yet, this fear finds legitimation of some sort in serious data-driven studies such as the one conducted by the PEW Research Center[2], projecting that Muslims are the fastest growing demographic group in the world and that by the year 2050, they will form 3.4 % of the total population in Finland, an approximate 400% increase in number.

Moreover, populist discourse spread through fake news websites with pseudo-statistical “facts”, as it is so fitting in the era of post-truth, have stirred the narratives in Finland more. In September, an article written by a lawyer and a member of the Finns Party, Jana Pedersen, was published on the website “MV-Lehti”, which is openly Islamophobic and xenophobic. Pedersen argues that due to the increased influx of refugees and the family reunification policies of the state, after a year, the number of Muslim immigrants in Finland would be 3.6 Mio.[3] Thus, the “Vincible ignorance” refers to the demographic changes in the country, yet with an unknown level of uncertainties to how the world-political situation will change in the near future.

The third and the last tomorrow is called “The unthought future(s)” which is “(…) a horizon of pure possibility that extends beyond the next 20 years. The unthought future(s) is not unthinkable but rather a horizon where something always remains unthought, which is to say that it is populated with seemingly infinite alternative futures (…)” (Sardar & Sweeney 2016: 6). In this dimension lies the “Invincible Ignorance” which is the “(…) ignorance of our ignorance of the potential risks of recent developments (…)”. (ibid. 8) Hence, the posters are connected in the present, more general populist right-wing discourse on an “Islamization of Finland”, as also Pedersen stated in her text, that if the number of Muslim immigrants continues to increase as according to her calculations, Muslim’s will eventually make Finland an Islamic country, “forcing her as well to wear the burkha”. This is ultimately the ignorance that gets to be instrumentalized for political purposes and hence, to prevent Finland from becoming sharianized, a vision that the first poster warningly suggests, the campaign poster above appeals to the people to vote for Change 2011 party – or otherwise the future of the country will be in jeopardy.

The Invincible ignorance embedded in Pedersen’s speculations and in the message of the second campaign poster (Fig.2) calls to question whether Finland can remain a sovereign state and of “Western Christian” nature; an essentialization that has been opposed to the Muslim world, “The East” in the sorts of discourse analyzed here. As Sardar & Sweeney (2016: 8) maintain, “We can only grapple with Invincible Ignorance by questioning our axioms, by critiquing our basic and long cherished assumptions, and by totally rethinking our worldview.” Thus, the Islamophobic notion of a manipulative Islam and “a creeping sharia” shadows the fear of the Islamization of Finland. This fear is additionally visualized in the picture of the veiled woman, whose eyes are turned suspiciously to her side, to watch out for the danger that comes from her side. Additionally, the similarly dressed woman in the first poster (Fig. 1) and “scared” her blue eyes reveal the implications of the Islamization of Finland not only resulting from the increased number of Muslim immigrant but also of ethnic Finns converting – or being forced to convert – to Islam.

Islamophobia when used as discursive tool in the hands of politicians aims at providing simple answers and truths by mostly through the so called “culture talk”. Assumptions are made for essentializing a culture without relying on native accounts about the worldview itself. Here, the threat image of Islam and Muslims plays a critical role for those whose political agenda is based on xenophobic and nationalist ideas. The topos of future and the analytical frame of Three Tomorrows is handy in analyzing how different aspects of ignorance and uncertainty are fed in into the argumentation in order to create fear and suitably offer measures of self-defense and at the best salvation of the nation by the politicians themselves. These discourses aims at creating images of a fundamental change such as a mass conversion and cultural coup by Muslim monsters and hence twists the extended present, the familiar future into a “Tomorrow” in its factual sense, and convinces the audience of the Unthought.

[1] For the party manifesto in Finnish, see http://muutospuolue.fi/puolueohjelmaluonnos-on-julkistettu