The COVID Chronicles could also be called the Chaos Chronicles. We live awash in uncertainty, buffeted by turbulence. Every morning the news brings another wave smashing us flat against the sand of the day. 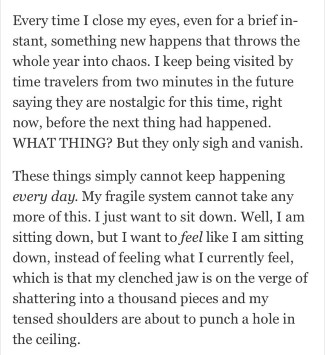 So it seemed to fit the mood of weeks and days perfectly to open the Washington Post on October 3 – the digital version, accessed on my iPhone before I even get out of bed in the morning - and read Alexandra Petri writing, “Every time I close my eyes, even for a brief instant, something new happens that throws the whole year into chaos. I keep being visited by time travellers from two minutes in the future saying they are nostalgic for this time, right now, before the next thing had happened…. These things simply cannot keep happening every day. My fragile system cannot take any more of this.” (Petri, ‘I’ve had enough news now, thank you,’ Washington Post) 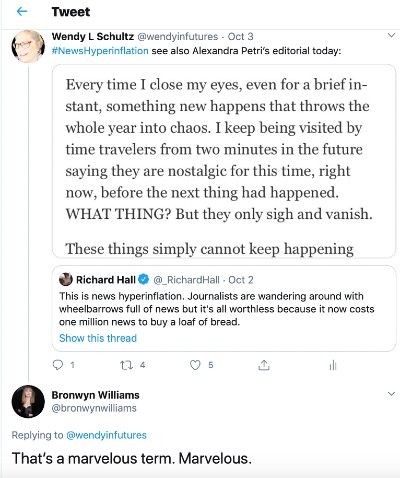 And, of course, on Twitter I found the perfect term to sum it up: News Hyperinflation.  The relentless bombardment by faster and faster news cycles, wheelbarrows full of news, blizzards of news become worthless because the news proliferates too fast to absorb, it is used so profligately it means nothing.

‘News Hyperinflation’ is a neologism – a word or phrase invented to capture something, some new habit of action or mind, some new fashion that has not previously existed, now does, and begs for expression.  Futures researchers find neologisms useful because they highlight evolving change, spotlight where our complex adaptive selves have generated an emergent novelty.

What are earlier examples of neologisms? How about ‘flash mob’?  Flash mobs became possible with the advent of ubiquitous mobile phones – and friends lists.

Invitations could snowball quickly through an extended network of friends and acquaintances for rapid organization of seemingly emergent crowd behaviours – instant parties, here-and-gone protests. More recently, of course, they have become commercialized and a bit more archly self-conscious – as all the YouTube examples of choirs and symphonies and art museums ‘bringing art to the people’ illustrate:

This new capability was easier to transfer once it had a name, easier to repeat, review, reflect.

Often something is unthinkable because we lack words for it. We struggle to perceive and describe in that lack.  But usually the term vacuum does not persist. Being the creative species we are, we invent terms: neologisms, literally, new words.  The website Wordspy used to be a great source for neologisms.  Now of course social media fountains up a great sea of memes, catchphrases, slang… and neologisms.

#NewsHyperinflation captures the lived experience of 2020 with great immediacy.  And it occurs to me that it provides a diagnostic for identifying the onset of a bout of postnormal times.

"Postnormal Times was theorised as ‘an in-between period where old orthodoxies are dying, new ones have yet to be born, and very few things seem to make sense’. Or, as the Italian journalist, Ezio Mauro put it in his conversation with the late British sociologist Zygmunt Bauman, ‘we are hanging between the “no longer” and the “not yet” and thus we are necessarily unstable’ (ref: Zygmunt Bauman and Ezio Mauro, Babel, Polity, Oxford, 2016, p 20). We are thus living in ‘a transitional age, a time without the confidence that we can return to any past we have known and with no confidence in any path to a desirable, attainable or sustainable future’."

from Serra del Pino, Jones, Mayo, “The Postnormal Perfect Storm – Part 1. The Nature of the Crisis”

That feeling of teetering on the cusp between our old comforts and discomforts and the abyss of turbulent transformation, between the no longer and the not yet, was echoed recently by Yanis Varoufakis,

"We are sitting on a saddle point, prepared to tip in either direction.

It is utterly indeterminate which of the two directions we travel."

And while that seat may be uncomfortable, it does open us to unfolding potentialities – as Kim Stanley Robinson puts it,

"The virus is rewriting our imaginations. What felt impossible has become thinkable. We’re getting a different sense of our place in history. We know we’re entering a new world, a new era. We seem to be learning our way into a new structure of feeling."

We need new words to make sense of those unfolding potentialities, to learn our way into new structures of feeling.

The Centre for Postnormal Policy and Futures Studies has been exploring new spaces off the field of doxa in futures studies, elaborating ideas suggested in the Funtowicz and Ravetz essay on postnormal science in order to light up dusty unconsidered corners of how change itself changes and flows into emergence. Postnormal times (PNT) are characterized by a context “in which ‘facts are uncertain, values in dispute, stakes high and decisions urgent’” [Funtowicz and Ravetz, “Science for the post-normal age,” Futures, 25 (1993), pp. 739-755].  Postnormal times emerge when increasing Contradictions, Chaos, and Complexity (the 3Cs) in the system interact and amplify each other – generating postnormal phenomena. Contradictions, Chaos, and Complexity themselves emerge and intensify during times of postnormal change, which is identifiable by its extreme levels of Speed, Scope, Scale, and Simultaneity (the 4Ss).  (See Postnormal Perfect Storm Part 1)

We try to normalize the turbulence.  The last four years have seen citizens in the US normalize and renormalize and renormalize successively outrageous public and political behaviour. Postnormal theory describes this frantic drive of our mindsets to stay set, to re-establish normalcy, as an artificial Manufactured Normalcy Field (MNF) (See Postnormal Perfect Storm Part 2).  That urge to reset one’s mindset and hold on to an ersatz normal as reality skitters ahead and systems ricochet from disorganization to reorganization is what PNT calls postnormal lag: our mindsets are out of step and happy to be so. But 2020 has pushed us beyond our ability to normalize, beyond our ability to inhabit that Manufactured Normalcy Field.  As Alexandra Petri wrote in the Washington Post piece,

"Now I’m staring at my phone trying not to blink in the hope that I can prevent any more news from happening. I zoned out briefly, and in the 60 seconds when my mind was elsewhere, October surprised me six times."

So that feeling of disjuncture, of imbalance on the disordered edge where old order and new order collide, of waking up to awareness of postnormal lag and living where expectations have exploded into shockwaves, is postnormal burst.  To return to our flash mob example, COVID has rendered flash mobs an antisocial behaviour – if not outright illegal in some places – and those whose lag has burst express that now digitally, as this regretful, rueful Zoom remake of the Banco Sabadell ‘Ode to Joy’ makes clear.

Theories by necessity abstract.  What does the lived experience of postnormal burst feel like? What are some symptoms by which we can diagnose it in the real world?  I propose #NewsHyperinflation as one, a profound contextual shift that brooks no denials. But wait, let’s reflect. Is news hyperinflation the chaff thrown up by postnormal change, or is it the cause? For example, you may be saying, what’s up with all these border skirmishes these days, all these countries renegotiating their borders? That may just be past filters dissipating – military intelligence would simply call that ‘last Tuesday’ – now the reporting is 24/7, with more sources, more diverse points of view, that elude many of the old news filters.

AND people now recognize that being an influencer means being first to report something, to broadcast the new next new thing – because you get more followers, more kudos, more hits, more retweets. In the end, it’s digital chickens and eggs – new technologies force adaptations to the chaos: the postnormal characteristics of simultaneity and complexity at reinforcing play.

And from the chaos, more emerges - #NewsHyperinflation in its turn creates two new turbulent behaviours, with accompanying neologisms. Were Wordspy still updating, two words that certainly would have made last week’s list would be doomscrolling coupled with schadensurfing – both a result of our new diagnostic, news hyperinflation. Because after all, how does the set mind respond once all attempts to reset normalization instead of resetting the mindset fail? Shock, disbelief, hysterical laughter, sardonic critique, mesmeric fascination with the unrolling toll of disasters and crises – doomscrolling! – an addiction to being first on the scene, a FOMO, keeping us all clicking. We are wallowing in the burst.

And, of course, in the trauma we want signs that we aren’t alone. Misery loves company and the updates on misery shared brighten our outlook for an instant, hence the attentive counting as the superspreading toll rises among those who denied the pandemic, those still embedded in the postnormal lag: sure a hug’s okay, a party’s okay, we are the exceptional ones, the virus won’t come by us. We counter the obsessive crisis data acquisition of our postnormal burst doomscrolling with the obsessive delight in the lag of others, the ironies reality serves their set minds – schadensurfing.

Researchers in June 2020 called COVID-19 the Great Anthropause, the moment the clutch of the world’s engine was shoved in, the gears all disengaged. But for most the lived experience seems to be the opposite of a pause: much more a frenetic scamper to keep up with all the waves and buffets and the damage done.  Life in the burst: watching the set minds scramble to reset, watching the systems yank themselves into some new configuration and in the process creating storms of crises, of impacts in places expected and unexpected, of erratic behaviours… of news, news, news, #NewsHyperinflation.

[Thanks to Christian Crews for critical reflection, Scott Jordan, Chris Jones, and Jordi Serra for edits and feedback.]